You are browsing the documentation for version 3.1 of OroCommerce, OroCRM and OroPlatform, which is no longer maintained. Read version 5.0 (the latest LTS version) of the Oro documentation to get the updated information.

The information below summarizes concepts and tools that are important for understanding and use of the test framework delivered within OroBehatExtension.

This section summarizes the limitations and agreements that are important for shared test maintenance and use.

Use default configuration for the application installed in production mode. If you do not have any mail server configured locally, set the mailer_transport setting in parameters.yml to null.

If you installed dependencies with --no-dev parameter earlier, remove composer.lock file from the root of the application directory.

In the Oro application, the initial state is the one when the application enters after installation without demo data. Scenarios that test features should rely on this state and should create any data that is necessary for additional verifications. Data may be created by the steps of the scenario or as fixtures.

Install the application without demo data in production mode using the following command:

These commands create a subdirectory for Chrome in your home directory, download ChromeDriver into the directory that you just created, uncompress files, and create a symbolic link.

After the command execution is complete, you can use chromedriver in the terminal.

To run ChromeDriver in background, append ampersand symbol (&) to the end of line, like in the following examples:

Before you begin, it is highly recommended to make yourself familiar with behat arguments and options. Run bin/behat --help for a detailed description.

When the Oro application is installed without demo data and is running, and the ChromeDriver is running, you can start running the behat tests by feature from the root of the application.

You may use one of the following commands.

Every bundle has its dedicated test suite that can be run separately:

Behat is a Symfony console application with its own container and services. A Behat container may be configured through Extensions using behat.yml in the root of the application directory.

Application container may be used by injected Kernel in your Context after you implement KernelAwareContext and use KernelDictionary trait.

Moreover, you can inject application services in behat Context:

If you need some specific feature steps for your bundle, create the AcmeDemoBundle\Tests\Behat\Context\FeatureContext class. This context is added to the suite with other common contexts. The complete list of common context is configured in the behat configuration file under the shared_contexts.

You can manually configure test suite for a bundle in the application behat configuration:

or in a bundle behat configuration {BundleName}/Tests/Behat/behat.yml:

Manually configured test suits are not autoloaded by the extension.

Every isolator must implement the Oro\Bundle\TestFrameworkBundle\Behat\Isolation\IsolatorInterface and oro_behat.isolator tags with priority.

You can disable feature isolation by adding the --skip-isolators=database,cache option to behat console command. In this case, the combination of the feature tests might run much faster, but the test logic should care about the database and cache consistency.

Elements is a service layer in behat tests. They wrap the complex business logic. Take a minute to investigate base Mink NodeElement.

It has many public methods; some of them are applicable only to certain elements. Every Bundle test can contain a particular number of elements. All elements must be described in {BundleName}/Tests/Behat/behat.yml the following way:

By default, tests use the named field selector to map form fields. Name field selector searched for the field by its id, name, label, or placeholder. You are free to use any selector for form fields mapping or wrap an element into the particular behat element.

Now you should implement the element’s setValue method:

Now you can use it in a standard step:

Page element encapsulates the entire web page with its URL and path to the page. Every Page element should extend from Oro\Bundle\TestFrameworkBundle\Behat\Element\Page.

Now you can use several meaningful steps:

Whenever behat runs a new feature, the application state is reset to default (see Feature isolation for more information): there is only one admin user, one organization, one business unit, and default roles in the database.

The feature tests must rely on data that is available in the application after the oro:install command execution. In most cases, this is not enough.

Thereby you have two ways to get more data in the system: using inline fixtures or alice fixtures.

You can create any number of entities in the feature tests. The FixtureContext guesses the entity class, creates the necessary number of objects, and uses faker to fill in the required fields when their value was not specified explicitly.

You use both faker and entity references in inline fixtures.

Sometimes you need many different entities with complex relationships. In such cases, you can use alice fixtures. Alice is a library that allows you to create fixtures in the yml format easily.

Fixtures should be located in the {BundleName}/Tests/Behat/Features/Fixtures directory. To load a fixture before the feature tests execution, add a tag (annotation) that is constructed using the following convention @fixture-BundleName:fixture_file_name.yml, e.g.:

It is also possible to load fixtures for any other bundles available for application.

Additionally, Alice allows you to include files via extension, so you can import files from other bundles:

You should always include fixtures from other bundles with entities that were declared within that bundle see :ref:`Conventions <behat-conventions>`.

You can use references to the entities in both inline and alice fixtures.

{Bundle}\Tests\Behat\ReferenceRepositoryInitializer used to create references for objects that already exist in the database.

The most commonly used references:

Behat has a native possibility to invoke formatters without executing the tests and hooks.

This can be useful in case you are not sure that you have declared all the necessary context for your feature. OroBehatExtension enhances this feature and adds extra functionality.

Each feature can have alice fixtures, added by tags. FixturesChecker will check every feature for ability to load fixtures, without actually loading the fixture.

Every bundle should contain its own behat tests for features in the {BundleName}/Tests/Behat/Features/ directory. Every feature is a separate file with the .feature extension and a specific syntax.

A feature starts with the following:

Next goes the feature scenario - a specific example that illustrates a business rule and consists of sequential steps. In addition to being a test specification and test documentation, a scenario defines the test steps and serves as an executable specification of the system.

Normally, a step starts with Given, When, or Then.

If there are multiple Given or When steps underneath each other, you can use And or But to organize them into logical groups. Cucumber does not differentiate between the keywords, but choosing the right one is important for the readability of the scenario as a whole.

Behat has isolators to make behat features independent of each other. One of those isolators is the database. It creates a database dump before the execution start, then drops it and restores it from the dump after each feature. This can take a while (up to 2 minutes on slow SSD). If you run behat tests often you would like to decrease this time. To boost the database isolator, you can mount the database directory to RAM. In the illustration below, we use tmpfs:

We need to tell AppArmor to let MySQL write to the new directory by creating an alias between the default directory and the new location.

For the changes to take effect, restart AppArmor:

Now you can start MySQL again:

After you restart the computer, all the data and the database structure gets lost. Therefore, you should copy data directory manually after every restart. Alternatively, you can create a startup script that may be launched automatically as a systemd service.

To prepare for auto-recovery using a startup script:

Check your fixture. Remove (unique) suffix in entity property in entity fixture, like in the following example:

Alice remembers all the values for the given entity property and tries to generate a unique value, but this causes issues when there is just one value for the entity property.

This option still may be used if combined with the autogenerated fake value, like in the following example:

The feature development consists of the following design stages:

Some of the steps may already be fully automated. Ideally, you should automate the missing steps after you plan using them in your feature test scenarios. If the feature functionality is already implemented, it is necessary to implement the behat steps involved in the feature testing.

However, sometimes it is impossible to do right away (because of the incomplete feature implementation, blocking issues, or missing information). In this case, you can temporarily mock the steps that are missing implementation.

A quick way to do so is to dry-run your feature tests. In the console, run the following command:

The feature is executed in the –dry-run mode, and at the final stage of execution, you are prompted to add undefined steps mock implementation to one of the existing contexts.

How to find the necessary step

When you design test automation scenarios for the new feature, you may have trouble finding steps to reuse from the hundreds of already automated steps. Use the tips below to find the necessary step.

While designing a scenario in the feature file, PhpStorm offers you hints on the implemented steps that match the keywords. E.g., when you type grid or form, the steps that involve these items pop up in the suggestions block. 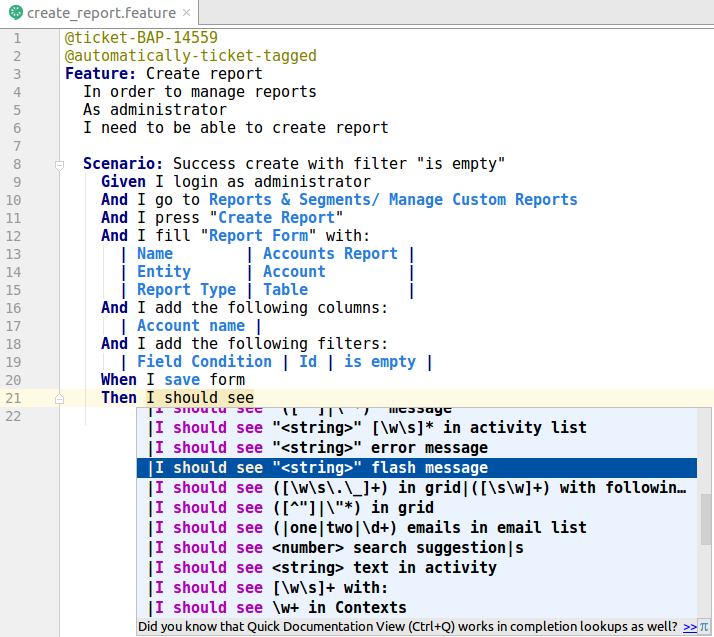 If PhpStorm does not offer you any hints as you type, please, verify the following:

Every Context class should implement the Behat\Behat\Context\Context interface. Get the list of implemented contexts and find the necessary one by name. 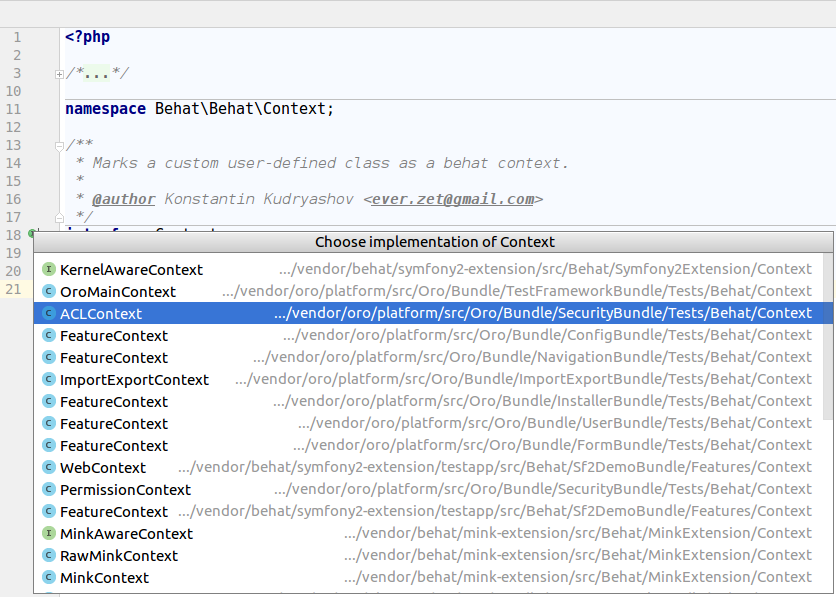 Use Grep in Console

If, for any reason, you do not use PhpStorm or behat plugin, you can still find the necessary step by filtering the output of the command that previews all the feature steps (use Grep).

Type the following command in your console:

You can use the behat command-line interface only after you install the application.